Happy Purim! They Tried to Kill Us, We Won, Let's Eat!

Today is going to be a very crazy day with Purim and all that entails and various personal matters to attend to.

There are several "ingredients" to celebrating Purim. We read The Megilla, the Story of Esther (very interesting if you've never read it), we give money to the poor (we do this regularly but it's commanded particularly on this day), exchange little packets of food with friends via an intermediary of sorts (child slaves are usually employed) and have a festive meal. Kids and adults dress up, alcoholic beverages are consumed rather liberally.

So, if wherever you are, you see a bunch of costumed Jews running in and out of cars and dropping off little gift packages, you'll know why.

This is what my table looks like this morning, plus I'm doing some other volunteer deliveries for Chabad. 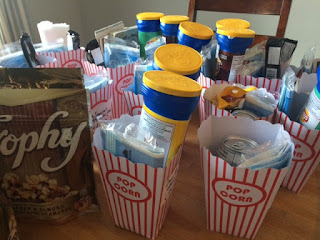 EVERYTHING PURIM IS HERE:

MORE ABOUT PURIM FROM AISH HATORAH

Here are some additional links for your consideration:

Why Marine Le Pen is going to win.

Though in my opinion, it’s really too late for France to recover. Demographically speaking, it’s actually impossible.

Obama is a Sinister, Evil, Disgusting Leftist and A Terrible Man:

"Obama is very careful to launch dirty attacks without getting any on his hands. The insults are anonymously sourced. The retaliation comes out of the bowels of the bureaucracy. And he only finds out about it from the media. That allows him to retain what he cares about most: his popularity."

"Obama and his people like to think that their dishonesty is a superpower. They pat themselves on the back for stabbing everyone else in theirs. Sometimes their smugness over how well they use the media to lie and smear gets out of control. Like the time Obama’s Goebbels, Ben Rhodes, boasted to the New York Times about how easy it was to fool everyone about the deal to protect Iran’s nuclear program.

"After Trump won, it was business as usual."

WHY TRUMP WON: “Obama plays chess. Trump overturns the board.”

And please, tell me all about how the Trumps are antisemites.

Barbarians and the Civilized

THESE ARE THE BARBARIANS