Jew haters like Holocaust memorials, they get all weepy about dead Jews.

They don't really like the uppity, live ones too much.

You may have seen the image featured in this story, the Chanukah menorah being lit in a private home with a Nazi flag hanging outside a building in Germany. 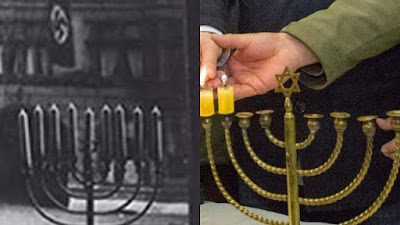 Well, that menorah and some of that family's descendants survived and made it to Israel.

That menorah was lit for Chanukah at Joseph's Tomb. Yeah THAT JOSEPH.

We will outlast and outlive the current Antiochus as well.

So, I only found this story on line in Hebrew, but I think you can hit "translate this page" if you are browsing in Chrome.

Anyway, the video is good as well. They are talking about how these are not easy times for the Jews now either, but here we are celebrating Chanukah, with the IDF soldiers lighting the candles at Joseph's Tomb.