Submission: They Could Have #BroughtBackOurGirls But The Dhimmis Didn't

An interesting nugget from the gag-inducing, social media narcissism of the West as Christian schoolgirls in Nigeria were kidnapped and forcefully converted to Islam: 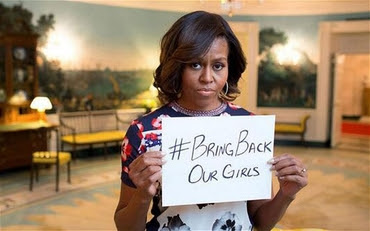 "US and UK: Despite all the widespread attention and international condemnation given to the kidnapping by Boko Haram of nearly 300 (mostly Christian) Nigerian girls — recall First Lady Michelle Obama holding a sign saying "bring back our girls" — the US and British governments knew exactly where many of the girls were, but failed to launch a rescue mission. According to Dr. Andrew Pocock, the former British high commissioner to Nigeria: "A couple of months after the kidnapping, fly-bys and an American eye in the sky spotted a group of up to 80 girls in a particular spot in the Sambisa forest, around a very large tree, called locally the Tree of Life, along with evidence of vehicular movement and a large encampment." He said the girls were there for at least four weeks but authorities were "powerless" to act."