Speaking of "Not Optimal"

Is there something not incredibly disturbing about a President who cannot think through the words that are required when discussing his fellow, murdered countrymen?

The detachment is so cold, kind of monstrous actually.

Pat Smith, the bereaved mother of Sean Smith, who was murdered in Behghazi, isn't very happy with the President's choice of words.

"My son is not very optimal - he is also very dead."

When citizens are murdered in terrorist attacks, people look to their leader for guidance and comfort, for words of prayer, for solace. The President has called those murdered 'folks' and referred to the murdered Ambassador as "Chris", claimed that these murders are 'bumps on the road' and now, that having dead Americans to deal with is "not optimal".

I was thinking back to the terrorist attack in Naharayim, Israel when Israeli school girls were murdered on a field trip by a Jordanian terrorist. Now, King Hussein was not exactly a huge, gushing fan of Jews, although he did have some good contacts with Jews and some very important shared strategic considerations with Israel.

However, when those girls were murdered, he made a trip to Israel and paid condolence visits to the grieving families. He sat on the floor with the Jewish families, as per Jewish tradition, and offered his condolences. That was quite extraordinary. 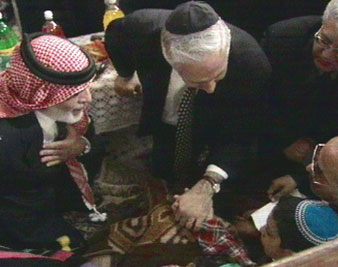 The President of the United States of America has Air Force One at his disposal all the time. Amidst the campaigning, amidst the dinners and the Hollywood fundraisers, would it not have been possible to make four trips to four grieving families? Not to face an inquisition, but to say-those citizens, those fellow Americans meant something to me and to our country.

They were not bumps on the road.

They were optimal human beings at the prime of their lives.

"My son is not very optimal - he is also very dead."

Leaders need to be there and say: we mourn with you. We can't possibly know your pain, but we are here with you.

Leaders lead the way to the grieving family, they don't run away from the broken families.

One comforting hug for each mother and father.

For each sibling, to give them strength.

How sad. And how chilling.