This is submission, there is no other word for it.

When a barbarian, fanatic, savage, terrorist regime insists that you to cover your nude statues, the proper answer is to fill the entire meeting room, and every hallway, and the dining room with them.

When they demand no alcohol, you serve more, in every dish, and as dessert.

And even worse than capitulating is offering submission in advance. It's much, much worse. It's sinister.

This is submission without a peep or a whimper, without a fight or a battle.

This is a thick, crescent-embossed curtain falling down on the West. 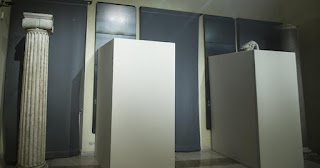 Statues of humans trapped in boxes, in Rome, home of Catholicism.

Does it take a Jew like me to find the symbolism of this display rather unnerving and revolting?

Without resistance, we will be boxed in, and rendered virtually unidentifiable by our unique, G-d given individual gifts and strengths. There will be uniformity, and more cowardice and fear.

What a disgraceful, pitiful, supine church and a pathetic excuse for a religious leader. This is absolutely disgusting capitulation to terrorism.